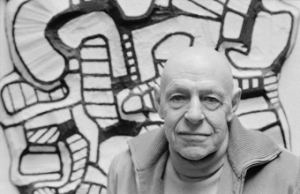 Jean Dubuffet was a French painter and sculptor known as the founder of the Art Brut movement. His fascination with the art of the untrained—specifically made by children, the mentally ill, or others to whom cultural art references would be unknown—prompted him to emulate their demonstrative mark-making and incorporate their independent style into his own practice.

Born Jean Philippe Arthur Dubuffet on July 31, 1901 in Le Havre, France, Dubuffet studied art at the Académie Julian with Raoul Dufy, Suzanne Valadon, and Fernand Léger in 1918, but left his training after six months. He returned to making art in the early 1940s and formed the Compagnie de l’Art Brut (1948–1951, restored in 1962) with André Breton, Slavko Kopac, and others. The painter and sculptor died on May 12, 1985 in Paris, France at the age of 83, and the Fondation Jean Dubuffet, established in 1973, continues to exhibit and collect his work.